Harry is invited to go to school at Hogwarts School of Witchcraft and Wizardry, led by Dumbledore. But his uncle Herman Duffeling and his aunt Petunia Duffeling do not allow this. For a while Harry is flooded with post owls, who have met letters with him Harry's admission note at Hogwarts, and one day so many letters arrive that their entire house is full of them. That is why Harry's uncle decides to move with the family to a remote house on a stone island in the sea. When Harry's birthday is eleven, Hagrid Harry comes to visit his new home at exactly 00:00. At that moment Harry is told that he is a super strong wizard, and must go to Hogwarts, a school for witches and wizards. Hagrid distracts the family by giving Dirk Duffeling, Harry's step brother, a pig's tail with his magic wand. This allows Harry to escape and he goes with Hagrid. Together they go to the Wegisweg. Here Harry can buy everything he needs, his books, the obligatory clothing, a magic wand and a permitted animal. Also told in a restaurant to Harry what really happened to his parents, and why everyone knows him.

In a magical way all your stuff is safe in this official licensed Harry Potter backpack. Because the backpack is fully lockable and water repellent, you can take it anywhere
Add to cart
Harry Potter Hogwarts Backpack
€39,95

Hedwig is Harry Potter's owl in the seven-part book series by J.K. Rowling. Hedwig is a female owl. According to the book, Harry gave her this name because he came across the name in a history book for the History of Magic art.
She is a white snow owl, w
Add to cart
Harry Potter shoulder bag Hedwig
€44,95 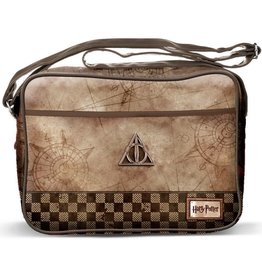 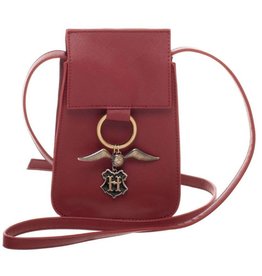 The Golden Snitch, often simply called the Snitch, is the third and smallest ball used in Quidditch. It is a walnut-sized gold-coloured sphere with silver wings. It flies around the Quidditch field at high speeds, sometimes pausing and hovering in place.
Add to cart
Harry Potter Golden Snitch crossbody bag
€29,95 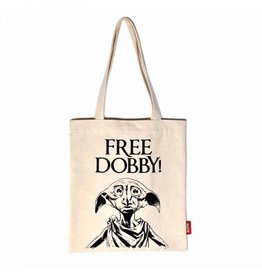