Pallas Athene is the Greek goddess of wisdom, science and the fine arts. She was patroness of the city of Athens. According to Greek mythology, Athena was born from the head of the god Zeus, fully grown and with full armour. Zeus gave her the skin of the goat Amalthea. As a goddess of war, Athena represented wisdom.

In the war against the Giants, Athena played a major role and performed many heroic deeds. Athena also played a major role in the Trojan War; she came to the aid of many heroes, such as Achilles and Odysseus. She also protected her favourite hero Heracles during his difficult tasks. 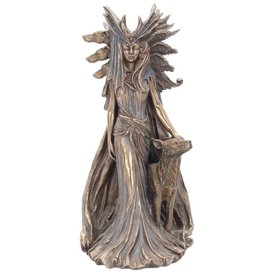 This mystical Goddess is cast in the finest resin before being given a bronzed finish. Hecate is a goddess in ancient Greek religion and mythology, most often associated with crossroads, entrance-ways, light, magic, witchcraft, knowledge of herbs and pois
Add to cart
Goddess Hekate figurine bronzed 25cm
€84,95 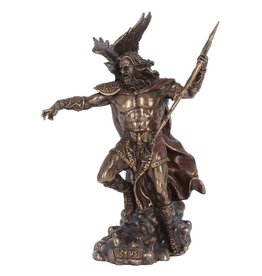 This Greek figure is cast in the finest resin before being given a bronzed finish. The figure shows Zeus, the king of the Greek gods, stood in the clouds of Mount Olympus, holding a lightning bolt in his right hand. On his left shoulder sits a golden eagl
Add to cart
Zeus bronzed figurine Large - 30cm
€99,95
Please accept cookies to help us improve this website Is this OK? Yes No More on cookies »